Or ‘ The Last Nepalese Outpost in stockbroker belt, or Baghdad Café.
Richard Elkington is a unique, perhaps eccentric individual who has created an equally unique place where people come and hear new music and enjoy good food in an atmosphere of warm hospitality.
Loved by both his clientele and the many artists that pass through, this is something, as described well by someone last night, of an oasis.
Richard finds me upstairs just finishing the sound-check with his son Cameron sound engineering.
He smilingly embraces me and asks where Lydia is.
I say she’s out getting a bottle or two of Guinness.
He puts his hands to his face.
“Oh no I was meaning to get some Guinness, I’ve been reading your blog”
We laugh.

He can’t hang around for long, people are coming in and he runs around welcoming the guests, making sure they are seated comfortably in the right area, cracking jokes and generally being a most excellent host.
Lydia returns and we are served a delicious Thai chicken curry made by his wife Paula.
The young staff are like extended family, they are going up and down stairs, into different rooms carrying plates of food.

The music will take place in a small room upstairs. Only about a third of the people here will fit into this room and the others will be in two other rooms, one, just behind this room has been beautifully converted into a luxurious Bedouin tent, where last time Lydia and I spent the night, and the other, downstairs. Both have large TV screens and the evening’s proceedings will be watched on these.

I don’t recall a more intimate gig than this is on all my travels, or feeling more ‘on the spot’
I will play for a half an hour and then continue for another forty-five minutes after a break.
I have a set list planned on the way up here that has tracks from ‘changing inside’ for the first half and then a list of all the songs that I might feel like playing to choose from in the second.

It’s been a while since I played some of these songs and I’m not feeling altogether relaxed to begin with, I notice some notes slipping, the audience, seated silently literally feet away from me brings an intense and challenging experience. I drift from moment to moment under close scrutiny, mostly from myself, wondering if my fingers will find the right notes.

As each song comes to a close the audience are very appreciative and I am grateful for their help.

Things begin to loosen up in the second half, a bit of humorous exchange in between songs and my playing starts to flow.
It is good to be really listened to and to see that the songs hold up well.
I meander through the list which include a few that haven’t been aired before and end with a trilogy ‘She’s a Bird’, which is a slow, plaintive ballad, ‘Song For Lost Children’, an upbeat shuffle and finally ‘Everyone Can Tell’, more of a foot-stomping country rock affair.

All present seem delighted with the evening, they shake my hand pay me complements on their way out,
My little suitcase is once again sprinkled with money from selling an amazing thirteen CDs and being paid a hundred pounds by Richard.  'money for music' I say elatedly on returning home.

Once the place has emptied we; Richard, Paula, Cameron and friends, Lydia and I hang out together in the Bedouin tent, it has become a custom. Pleasant as it is though at midnight I realize I am totally exhausted, the night before we we’re up until three in the morning, I was buzzing with impressions of the Belle Vue gig.


We drive home under an awesome moon. 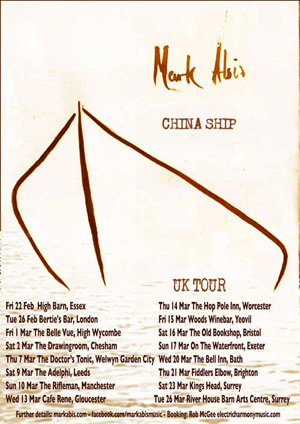